The History of UUMC

One Sunday night in 1907, seven families came together to worship according to the doctrines of the Northern branch of the Methodist Episcopal Church, North. When they first organized under the leadership of Reverend R. E. Farley, they met in the courthouse. Less than two years later, they began building a $30,000 structure, located at Seventh and Lamar streets. This building would house the congregation and serve for the YMCA. During the construction of the building, a severe wind and hail storm knocked down one of the walls. The congregation had storm and hail insurance, which enabled them to continue the project. One of the outstanding features of this building was the large dome in the center ceiling.

In 1924 the name of the congregation was changed to Grace Methodist Episcopal Church, North. This was to avoid confusion with First Methodist Episcopal Church, South, which was then located three blocks south at 10th and Lamar streets. In 1939, the Northern and Southern groups reunited as they had been before the Civil War. The names Northern and Southern and Episcopal were eliminated from the names of these church bodies.

The two-story brick parsonage was build just to the north of the church building. In the late 40’s the two story brick building adjacent to the church was purchased. A walk-way was constructed to join the church and the building at the second story level. The top story was used for Sunday School classrooms while the lower story was rented to business firms.

It did not seem wise to the District and Conference leaders, as well as our own local leaders, to have two downtown Methodist Churches in the town the size of Wichita Falls in 1950. Parking space was becoming a problem. New population growth had begun and with it, new housing construction, which was primarily in the southern and western area of the city. Therefore, plans and probabilities of moving Grace Methodist Church were in the discussion stage.

When the Reverend Carl E. Kneightley was assigned as pastor of the church in June 1952, momentum began. Of course, this meant the construction of a new church building and a new parsonage. Specific plans began to unfold and a budget campaign was mapped out. Also plans were made to solicit outside gifts, especially from the Methodist Community. Bishop W. D. Martin appealed to this group to support Grace Methodist Church in its efforts to relocated and to build, saying “The Methodist community owes the people of Grace a large debt for giving the city what will amount to a new a vigorous Methodist Church.” As a result of faith and prayer, the budget campaign was a success when the members pledged above and beyond what was needed to build the new campus. 6 acres of land was bought from W. B. Hampton’s T-Bone Cattle Ranch, which was located across from Midwestern University. This area is now known as the Country Club estate.

On December 5, 1954, groundbreaking for the new church building was observed in a ceremony directed by the Reverend Dan Barron, District Superintendent. In the spring of 1955, services began to be held in McGaha School building by Reverend Kneightley. More than three hundred members were reported as moving from the old location. The congregation moved into the currently location in late 1955. In the late 1980’s the congregation was faced with the decision to build a larger Sanctuary as membership grew. In 1992 a beautiful towering new Sanctuary was built on the campus, as part of the original master plan. In 2011, a flood in the Fellowship hall resulted in a beautifully restored education wing. The present campus is a beautiful and peaceful place, with lots of open green space and fits well in the surrounding area. Today, the congregation continues to make disciples of Christ, and makes missions and outreach a priority. 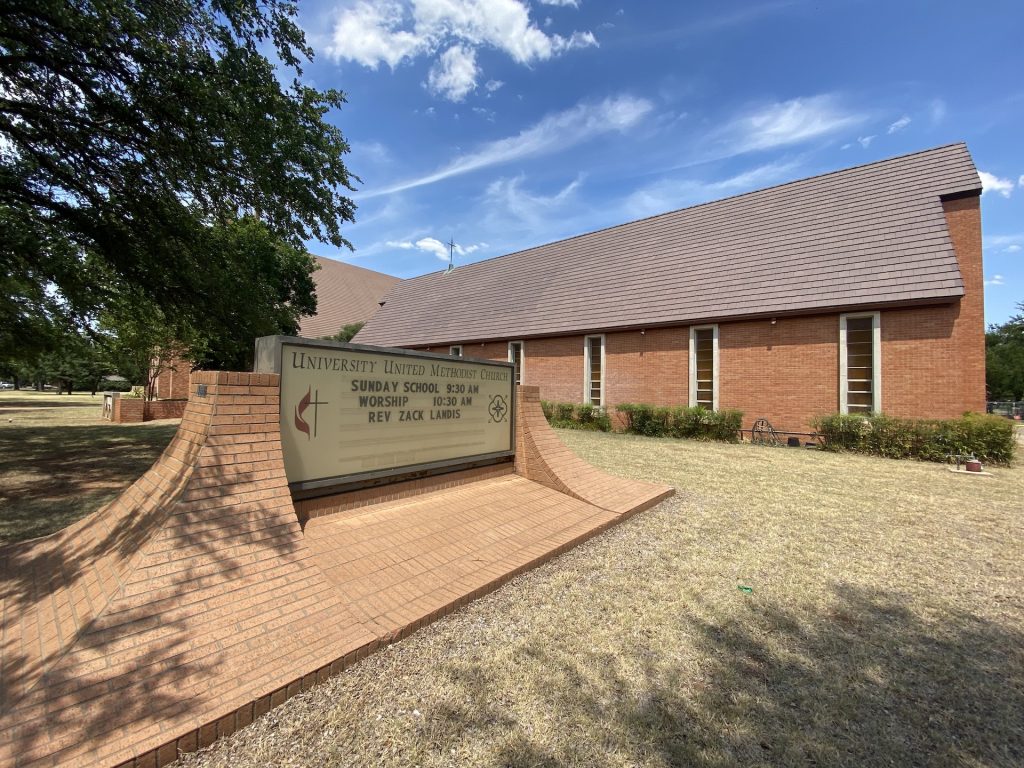